Skip to content
A few times a year with a couple of friends we try to explore things that we don’t do in our boring daily office jobs .
In our society we are getting more and more detached from relevant reality and from real life. We just wanted to know where the steaks come from, or sausages for that matter.
We aren’t carnivores, but we aren’t vegetarians either and sometimes we hear or read horror stories about food production, so we decided to have a look ourselves.
At 6.00 AM, we gathered at the central slaughterhouse here in Amsterdam, prepared for the worst. We got dressed like technicians in a lab for germ warfare and had to disinfect our hands and shoes. 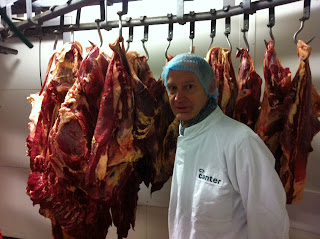 Of course it was rather chilly in the hall and we saw the cows just killed, hanging there to get skinned and dissected.  We witnessed the difference between the meat quality of an injured cow (injured before she arrived at the slaughterhouse) and a healthy cow. Injuries and stress immediately have a negative impact on the quality of the meat! Injury causes pain and muscle contraction, leading to lactic acid formation and degeneration of meat. The independent quality controller immediately rated the meat as being of a low quality. This also lowers the price of the meat and limits the possible use.
Despite what might be perceived as a cruel, cold and industrial approach to our food, the people talked with passion, love and pride about their product, the cattle and the meat.
Chunks of beef are sold to different processing plants and one of these was where we were heading next. This is where the meat is transformed into its final products, into rump steak, sirloin, sausages, etc. At a very modern plant which looked more like a nice, clean, high-tech office building, we were even allowed to make some sausages and dissect a chunk of hind leg, the round. 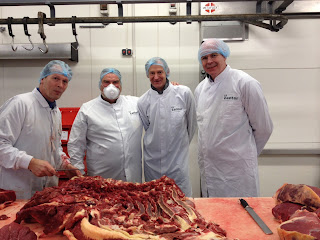 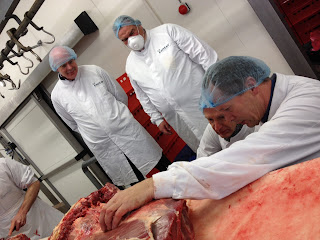 The third part of the tour was of course the butcher shop itself, the only part that is normally visible to us. We visited one of the shops of Hergo. Hergo is family business with a well-known chain of butcher shops in the Amsterdam environment. Almost more like a deli specializing in meat products.
The final part of our journey was visiting the farm where the cows came from, a short ride to the “green hart of Holland”, green meaning only grass and meadows, not trees or rainforest.
The farmer, who has a small farm, keeps less that 80 cows which were at that time were standing in the stable due to the  low temperature. The farmer seemed to know every cow personally and hadn’t had a holiday since many years since he could not leave his cows alone and did not want someone else to be responsible. 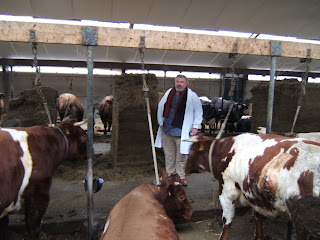 The cows were the typical Belgian blue or Piemonte race, the ones with the oversized muscles of bodybuilding cows with a genetic defect. They have a mutated the myostatin gene, which normally limits their growth, but in this case doesn’t which leads to disproportionate muscle growth. It is a natural mutation, not something genetically engineered by humans!
At the end of the day we concluded that we have (even) more respect for the meat that we eat. What we saw was good, of high quality and respectful towards cattle. Good to know!