Last week in spent in the US, see the photo and the caption below.

I love coming back to the USA, especially to Alaska.

Seeing the picture and the capture, I bet at least a few attentive people thought: “hey, but this photo is not made in Alaska”, and they were right it was quite obviously in Phoenix, Arizona, at the EXOS Athletes Performance Centre to precise, but about that later.
Back to the picture and the capture. Most brains immediately responded through their error detection centre or as I call it “discrepancy centre”…… “something is wrong here”.
Why simply because there are no cactuses in Alaska (and I am just assuming because I have never been there). Our brain extremely rapidly compares new information with existing information and associates this. In principle a very important survival mechanism, but also the source of errors like the one above. As a matter of fact, we are more or less convinced, let’s say brain-washed, about the superiority of our brain, often considered as being the most complex system in the universe,  that we almost start to believe in it superior functioning and infallibility. But if you look further and deeper you will start to understand that our brain, like and complex system is full of design errors, bugs, filters, biases and glitches.  It doesn’t really matter which brain function we observe, it could be perception (optical illusions), memory (witnesses), or decision-taking (bounded rationality). Our brain is not working as rational, undistorted and as linear as we often suppose it is. Many decisions in our lives are not taken on a rational basis but are the result of emotional and irrational inputs, of reflexes and instincts. We, that is to say, our brains are not as smart and good as we like to think it is. But the brain developed an instrument to deal with this, the brain is a great alibi-machine and story-teller. In case of any irrational discrepancy it quickly makes up an explanation to modify, or better, to minimize the discrepancy. For oneself and for others. This is of course Psychology 101, learned, but ignored or forgotten. 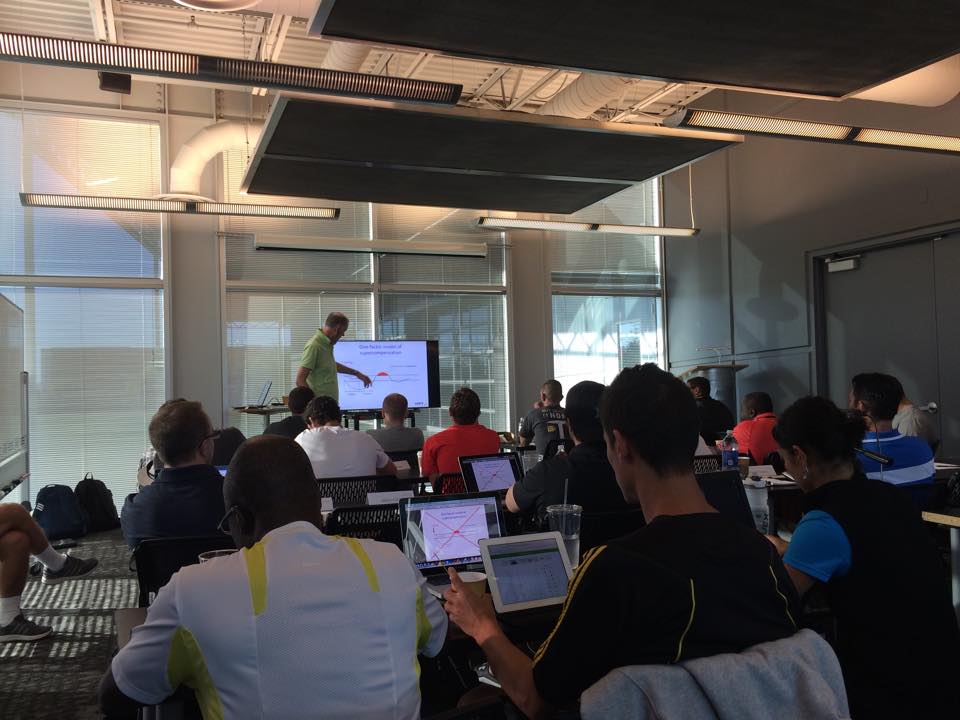 The EXOS seminar “From mystery to mastery” was a great experience for me. An opportunity to meet with Nick Winkelman and his excellent staff of people at EXOS, and with a large group of young, dedicated and very smart coaches to share my limited experience with. And last but not least, to team up with my very dear colleague and one of the brightest people I know, Dan Pfaff,  an avid reader, a profound thinker, and an experienced and wise man, what a pleasure and an honour to work together with him, knowing that in 3-4 weeks we will do that again.